The fresh faced naivety and optimism of a student teacher is soon beaten out. There is a flashing neon target on their head asking for students to cause them no end of grief. Idealistic aspirations of ‘making a difference’ and inspiring children to ‘follow them dreams’ soon become incinerated by the inferno generated for the mere self-preservation required in the classroom.

Despite this, Paper Planes insists on providing a fancifully functional classroom environment in this coming of age piece about aeronautical origami. If we begin by looking at Pete Rowsthorn’s portrayal of an enthusiastic classroom teacher, we get a picture of how good communication with children works. He is creative and fun, while still remaining aloof and being a disciplinarian. Case in point is his collection of mobile phone devices in a sombrero. In contrast Rowsthorn’s student teacher Jethro arrives from Melbourne with too much smiling going on. This is not to say I didn’t go into my first classroom with a big enthusiastic grin on my face. The difference was the grin was smeared off within minutes as my students misinterpreted my expression for weakness. 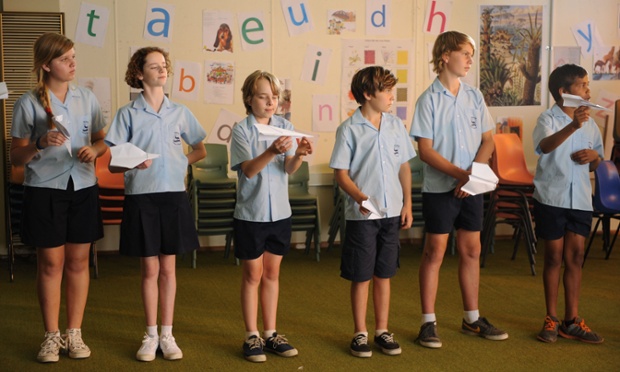 In this film, the students continue to respond positively to the student teacher’s elated mood. They are cooperative and show no sign of cutting this inspirational nincompoop down at the knees. Then, in a most unconvincing portrayal of pedagogy, he introduces his first lesson with the immortal lines, “Today I’m going to teach you how to make the perfect plane”. I mean what lesson was this? Where was the educational value? Why was he using fresh paper from the packet, instead of recycling scrap paper?

If a real teacher was to pull this kind of stunt on their first day of practicum, they’d be lynched by the class, and marched to the principal’s office by their mentor. Additionally, and I say this from experience, you would not want to demonstrate to students how to fold something that could become a major disruption to your class. A sheep at the abattoir would not show a butcher how to sharpen a blade; a mouse would not invite Mr Tibbles around for tea; and a priest would not invite a convicted felon to give a guest homily at mass.

The message of the film is positive. And if we suspend disbelief in regards to the lacking nature of behaviour management strategies, the film certainly has adult characters who encourage children to dream big. I only wish the students I have taught had been as compliant as those in the film. Maybe I’d have produced a few more high achievers who ended up competing in international competitions.

Paper Planes was certainly a good reminder that every now and then it may be worth going back to my original doe-eyed views of education and how a little bit of honest enthusiasm can affect massive change.