I didn’t read many Dick Bruna books as a child, but I have vivid memories of the theme tune from the television series based on his books:

sit with me and have a look

and all of it especially

The simplicity of the chant was as simple as the drawings in the books. Though, I was to find out the pictures were in fact collages not drawings, when I visited the Centraal Museum in Utrecht to track down the studio where Bruna had created his work, most significantly the humble rabbit Miffy.

Miffy (or Nijntje as she is called by the Dutch) and her menagerie of friends are heavily influenced by the De Stijl movement, which was on display in numerous corners of the Centraal Museum. Ironically one of the most famous artists of the movement, Piet Mondrian – you know him from that blocky art piece with the primary colours – would have been unsatisfied by all the rounded lines for he threw his toys out the pram when the De Stijl artists moved into architecture and diagonal lines. The rounded lines of Dick Bruna’s creatures would have blown his right-angled mind. 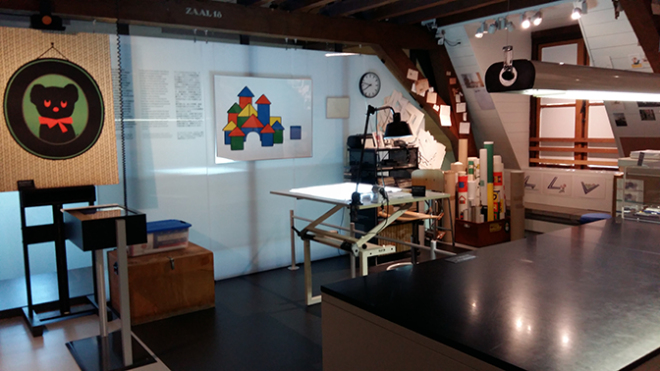 But it was the very shapes of Bruna’s images that skyrocketed Miffy to fame and fortune in her home of the Netherlands, Japan, and across the world. She predates Sanrio’s Hello Kitty and arguably heavily influenced the style of those characters.

I have been enamoured by the characters of Sanrio and various other chubby little characters of Japan, since I once visited Tokyo and found myself impulse purchasing a vast array of plush toys including Doraemon (a robotic cat), Anpanman (a bread-faced superhero), Totoro (a giant dust bunny) and additionally a daily dosage of doughnuts from Mr Donut, due only to the fact they were using Rilakkuma (a brown bear) in the marketing. Whatever subliminal message the big-brand giants were sending me, it was working.

My own fascination of the ‘kawaii’ (cute) characters of Japan drew me, like an anime-eyed moth to a flame, to the very top floor of Utrecht’s flagship museum to enter the studio of Bruna. The studio had been meticulously dismantled from its original home and reconstructed in the attic of the museum. The collection of little mostly-orange-spined books strikingly filled shelf upon shelf with every edition of Bruna’s books included in every language. Wide drawers in the artist’s studio are filled with offcuts from the red, blue, yellow, green and brown paper he used. There are posters of the book covers he illustrated for his father’s publishing company. But it is the rabbit that I am here to see. It is the rabbit I want answers from.

How does something as simple as this little white bunny capture the world’s imagination?

Perhaps, it’s in the eyes.

All the characters, created by Bruna, maintain eye-contact at all times. They stare from the pages of their books, permanently engaging with the reader. This is often done at the cost of practicality with characters riding bicycles, pushing wheelbarrows and cooking food without looking at where they are going or at what they are doing. But we suspend our disbelief in the safe knowledge that Miffy and her friends are very cute to look at – albeit they have no nose and their mouths are merely crosses.

I was reminded from this visit, how successful simple things can be. A global phenomenon was born from a white rabbit living in a world of primary colours, virtually torn from the De Stijl rectangles in those most famous paintings. I was reminded of the simple power of eye contact. I was reminded of the simple stories and lessons that could be learnt from characters who cooperate. I was reminded how simple the tools to success may be. Bruna did not have all the new-fangled gadgets we throw at children. He was armed with some tracing paper, black paint on a brush, a pair of scissors and a selection of about five colours.

I was reminded to keep it simple.