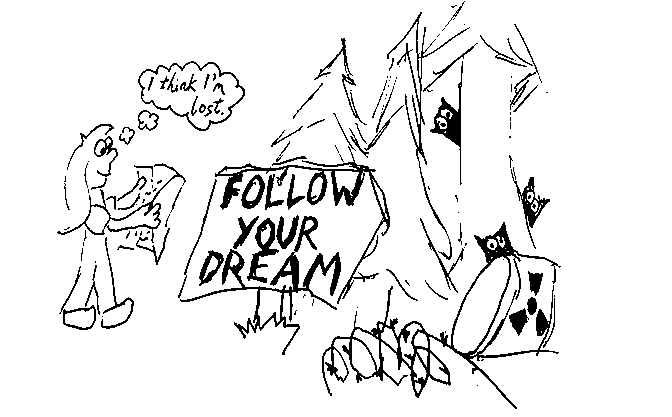 We’re often affirming children’s aspirations rightly or wrongly. The danger being that if all children’s dreams were realised, the world would be littered with popstars, football players and fire fighters – perhaps also ballet dancers.

I have a distinct memory of sitting at the poolside as a young teenager, the steaming chlorinated water incubating in my nostrils. An eight-year-old member of the swim club was banging on and on about how his mother had told him he would be the ‘next Ian Thorpe’. This bumpkin only trained half of the week – hardly Olympic standard. How we laughed and laughed at his naïve optimism. Hopefully our cynical adolescent sneering didn’t damage him too much. Hopefully he pulled a (Taylor) Swifty and hashtagged ‘haters gonna hate, hate, hate, hate, hate’ before shaking it off all the way to a gold medallion at the State swimming championships. But let’s be honest, he wasn’t going to be an Olympic swimmer.

Then there have been the various chumps I’ve taught who play soccer/football. They run around on the bitumen surfaced playgrounds of inner London, unwittingly wearing down the studs on their football boots designed for grass surfaces. They spend their evenings glued to the controller of their console getting a computer-rendered Ronaldo to score virtual goals, and somehow under the misunderstanding that these fine-motor skills they’ve developed with their chubby digits will migrate down their spine into their feet. None of them spend time on a real (i.e. grass) pitch, nor are they part of any football club, even within school. Some of my students have, honest to God, thought they would be headhunted from the playground by talent scout passing by the school gate on their way to the supermarket. Most recently one of the dafter students in class, would blather on at length about his guaranteed position in the Premier League. He was aged 11. My teaching assistant at the time saw fit to revel in ridiculing his lack of ability at every turn. Highly unprofessional, I’m sure. But the child’s delusions of grandeur (and his father’s for that matter – a gentleman who saw fit to fuel his son’s narcissism) were unlikely to lead to him pulling a Swifty to hashtag ‘players gonna play, play, play, play, play’ and shake it off into a real life FIFA tournament.

Every child in their mirror clutching their hairbrush and belting their lungs out, under the  misapprehension a record deal will befall them because Simon Cowell will overhear them humming the theme tune to Home and Away in the gluten-free aisle of Woolworths.

Every child, gazing into their webcam, providing inane commentary of their walkthrough of Fortnite, screen-capturing every moment of combat blow-by-blow in the lofty hope their YouTube channel will be met by a landslide of views and likes that amount to billions of dollars in cryptocurrency.

Every child rehearsing their Oscar acceptance speech in the mirror, because Olivia Colman told them “any girl who’s practising her speech on the telly, you never know!”

Celebrities, magazines, musicians, stage-parents, motivational posters; they are all responsible for the hyperbole that leads children to believe they can achieve anything. So, what would happen if we spread a message of mediocrity alongside satisfaction?

I belatedly went to watch puppet musical Avenue Q, at the Wimbledon Theatre, and was struck by the truth talking of the song ‘For Now’, containing the lyrics: “You’re going to have to make some compromises for now. But only for now…”

While Avenue Q’s sentiment is the antithesis to the life-affirming messages of Sesame Street, could a song like ‘For Now’ set more realistic expectations? Would we be more satisfied or merely complacent? What is the difference between ambition and delusion?

Ultimately the question dangles above many of us like the sword of Damocles ready to slice our childhood into adult size chunks: When do we give up on our childhood dreams?

Perhaps it would be best to never give up. It is certainly a bad plan to stagnate. Bilbo Baggins taught us that when he thought, “Go back?… No not at all! Go sideways? Impossible! Go forward? Only thing to do! On we go!”

It’s easy to preach tenacity to children to obtain what they want – to instil self-belief. Sometimes we need to remind ourselves to do the same. To push through to the next level. Keep the goal in sight.

I sometimes find myself in a loop of listening to Diana Ross telling Big Bird to believe in himself. Perhaps the messages of Sesame Street are more apt for us to follow than the easy cynicism of the jaded characters in Avenue Q. Perhaps we must return to our childhood for advice on our living our adulthood. Diana Ross singing Believe in Yourself is certainly more powerful than any self-talk cassette tape: “What seems right to them, quite often might be wrong for you. So make sure you try to climb before you get too scared you’ll fall.”

Or perhaps it’s a balance of expectations.

A former human kid who became an adult and then a teacher vents his frustrations coping with the disciplining and educating of the modern child. View all posts by kidsihated